Anubis god associated with mummification and the afterlife in ancient Egyptian religion.

Like many ancient Egyptian deities, Anubis assumed different roles in various contexts. Depicted as a protector of graves as early as the First Dynasty (c. 3100 – c. 2890 BC), Anubis was also an embalmer. By the Middle Kingdom (c. 2055 – 1650 BC), Anubis was replaced by Osiris in his role as Lord of the underworld. One of his prominent roles was as a god who ushered souls into the afterlife. He attended the weighing scale during the "Weighing of the Heart," in which it was determined whether a soul would be allowed to enter the realm of the dead. Despite being one of the most ancient and "one of the most frequently depicted and mentioned gods" in the Egyptian pantheon, however, Anubis played almost no role in Egyptian myths.

Anubis was depicted in black, a color that symbolized both rebirth and the discoloration of the corpse after embalming. Anubis is associated with Wepwawet (also called Upuaut), another Egyptian god portrayed with a dog's head or in canine form, but with grey or white fur. Historians assume that the two figures were eventually combined. Anubis' female counterpart is Anput. His daughter is the serpent goddess Kebechet.

"Anubis" is a Greek rendering of this god's Egyptian name. In the Old Kingdom (c. 2686 BC – c. 2181 BC), the standard way of writing his name in hieroglyphs was composed of the sound inpw followed by a jackal over a ḥtp sign:

A new form with the jackal on a tall stand appeared in the late Old Kingdom and became common thereafter:

According to the Akkadian transcription in the Amarna letters, Anubis' name (inpw) was vocalized in Egyptian as Anapa. 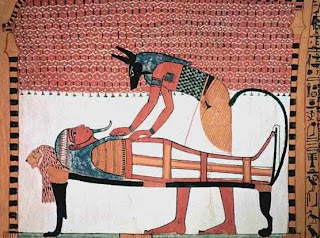 In Egypt's Early Dynastic period (c. 3100 – c. 2686 BC), Anubis was portrayed in full animal form, with a jackal head and body. A jackal god, probably Anubis, is depicted in stone inscriptions from the reigns of Hor-Aha, Djer, and other pharaohs of the First Dynasty. Since Predynastic Egypt, when the dead were buried in shallow graves, jackals had been strongly associated with cemeteries because they were scavengers which uncovered human bodies and ate their flesh. In the spirit of "fighting like with like," a jackal was chosen to protect the dead.

The oldest known textual mention of Anubis is in the Pyramid Texts of the Old Kingdom (c. 2686 – c. 2181 BC), where he is associated with the burial of the pharaoh.

In the Old Kingdom, Anubis was the most important god of the dead. He was replaced in that role by Osiris during the Middle Kingdom (2000–1700 BC). In the Roman era, which started in 30 BC, tomb paintings depict him holding the hand of deceased persons to guide them to Osiris.

The parentage of Anubis varied between myths, times and sources. In early mythology, he was portrayed as a son of Ra. In the Coffin Texts, which were written in the First Intermediate Period (c. 2181–2055 BC), Anubis is the son of either the cow goddess Hesat or the cat-headed Bastet. Another tradition depicted him as the son of his father Ra and mother Nephthys. The Greek Plutarch (c. 40–120 AD) stated that Anubis was the illegitimate son of Nephthys and Osiris, but that he was adopted by Osiris's wife Isis

For when Isis found out that Osiris loved her sister and had sexual relations with her in mistaking her sister for herself, and when she saw a proof of it in the form of a garland of clover that he had left to Nephthys - she was looking for a baby, because Nephthys abandoned it at once after it had been born for fear of Seth; and when Isis found the baby helped by the dogs which with great difficulties lead her there, she raised him and he became her guard and ally by the name of Anubis.

George Hart sees this story as an "attempt to incorporate the independent deity Anubis into the Osirian pantheon." An Egyptian papyrus from the Roman period (30–380 AD) simply called Anubis the "son of Isis."

In the Ptolemaic period (350–30 BC), when Egypt became a Hellenistic kingdom ruled by Greek pharaohs, Anubis was merged with the Greek god Hermes, becoming Hermanubis. The two gods were considered similar because they both guided souls to the afterlife. The center of this cult was in uten-ha/Sa-ka/ Cynopolis, a place whose Greek name means "city of dogs." In Book XI of The Golden Ass by Apuleius, there is evidence that the worship of this god was continued in Rome through at least the 2nd century. Indeed, Hermanubis also appears in the alchemical and hermetical literature of the Middle Ages and the Renaissance.

Although the Greeks and Romans typically scorned Egypt's animal-headed gods as bizarre and primitive (Anubis was mockingly called "Barker" by the Greeks), Anubis was sometimes associated with Sirius in the heavens and Cerberus and Hades in the underworld. In his dialogues, Plato often has Socrates utter oaths "by the dog" (kai me ton kuna), "by the dog of Egypt", and "by the dog, the god of the Egyptians", both for emphasis and to appeal to Anubis as an arbiter of truth in the underworld.

In contrast to real jackals, Anubis was a protector of graves and cemeteries. Several epithets attached to his name in Egyptian texts and inscriptions referred to that role. Khenty-imentiu, which means "foremost of the westerners" and later became the name of a different jackal god, alluded to his protecting function because the dead were usually buried on the west bank of the Nile. He took other names in connection with his funerary role, such as "He who is upon his mountain" (tepy-dju-ef) – keeping guard over tombs from above – and "Lord of the sacred land" (neb-ta-djeser), which designates him as a god of the desert necropolis.
Most ancient tombs had prayers to Anubis carved on them. 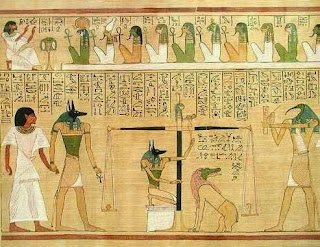 As "He who is in the place of embalming" (imy-ut), Anubis was associated with mummification. He was also called "He who presides over the god's pavilion" (khanty-she-netjer), in which "pavilion" could be refer either to the place where embalming was carried out, or the pharaoh's burial chamber.

In the Osiris myth, Anubis helped Isis to embalm Osiris. Indeed, when the Osiris myth emerged, it was said that after Osiris had been killed by Set, Osiris's organs were given to Anubis as a gift. With this connection, Anubis became the patron god of embalmers; during the rites of mummification, illustrations from the Book of the Dead often show a jackal-mask-wearing priest supporting the upright mummy. 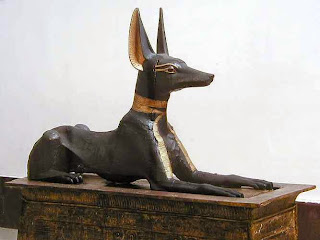 Anubis was one of the most frequently represented gods in ancient Egyptian art. In the early dynastic period, he was depicted in animal form, as a black jackal. Anubis's distinctive black color did not represent the coat of real jackals or wolves, but it had several symbolic meanings. First it represented "the discolouration of the corpse after its treatment with natron and the smearing of the wrappings with a resinous substance during mummification". Being the color of the fertile silt of the River Nile, to Egyptians black also symbolized fertility and the possibility of rebirth in the afterlife. 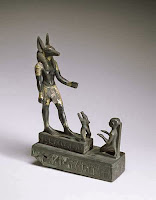 Later Anubis was often portrayed as a jackal-headed human. An extremely rare depiction of him in fully human form was found in the tomb of Ramesses II in Abydos.
Anubis is often depicted wearing a ribbon and holding a nekhakha "flail" in the crook of his arm. Another of Anubis's attributes was the Imiut fetish.

In funerary contexts, Anubis is shown either attending to a deceased person's mummy or sitting atop a tomb protecting it. New Kingdom tomb-seals also depict Anubis sitting atop the nine bows that symbolize his domination over the enemies of Egypt.